Tariffs, an inverted yield curve, Brexit, a major attack on oil production facilities in Saudi Arabia, an impeachment inquiry, Presidential election frontrunners with widely different agendas… the list of headlines clouding the outlook for the global economy and financial markets continues to get longer, fueling angst already felt by many investors.  Shown below, Google searches for the word “recession” have spiked recently, even though the global economy continues to expand. 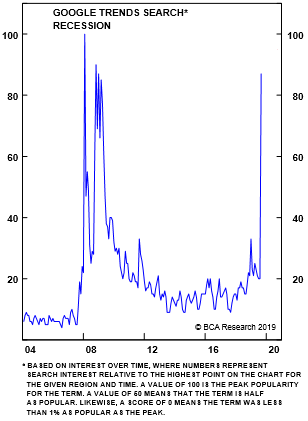 From our conversations with clients, we understand that many of you identify with this feeling of unsettledness.  We would be remiss if we did not acknowledge that elevated headline risk gives us pause with respect to our outlook.  However, we weigh these risks in the context of the current macroeconomic backdrop, grounding ourselves in the underlying data, and despite numerous potential headwinds, maintain our view that the global economy is more likely to continue to expand, albeit modestly, in the near-term than enter a recession.  Below, we discuss market performance in the third quarter, our outlook, and how we are positioning client portfolios.

Falling bond yields have been a defining characteristic of fixed income markets over the past 12 months.  After peaking at 3.25% last October, the yield on the 10-year U.S. Treasury Note declined to 1.43% in September, just shy of its all-time low of 1.34% before ending the quarter at 1.68%.  In Japan and across much of Europe, bond yields fell further into negative territory.  While accelerating growth pushed yields higher between mid-2016 and early-2018, weaker growth has pulled them lower this year.  Shown below, there historically has been a close relationship between the yield on the 10-year U.S. Treasury Note and the ISM U.S. Manufacturing Index, a measurement of expected U.S. manufacturing activity. 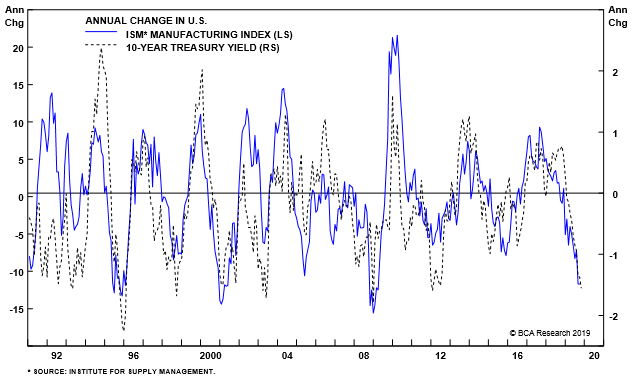 Although difficult to time exactly, our research suggests that we may be nearing the bottom of this manufacturing cycle.  As we have discussed in previous communications, global financial conditions have eased considerably, which history suggests should provide a tailwind to economic activity over the next six to nine months.  Shown below, this dynamic appears to be taking effect as evidenced by global leading economic indicators (LEI) recently turning upward.  LEI historically has led expected manufacturing activity by a few months. 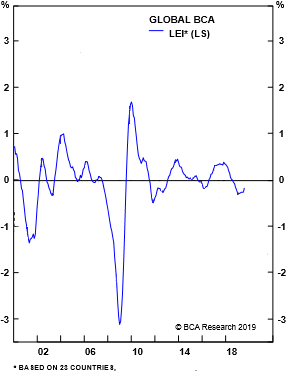 Despite weakness in the manufacturing sector, the U.S. economy appears to remain on solid footing.  According to their latest model, the Fed is forecasting real GDP growth of 1.8% for the third quarter, down from 2.0% growth in the second quarter but positive nonetheless.  The ISM U.S. Non-Manufacturing Index declined in September but still resides at a level that is consistent with expanding services activity.  Additionally, real personal consumption spending is expected to grow 2.5% in the third quarter, down from 4.6% in the second quarter but still a healthy pace.  Shown below, average hourly earnings have been increasing and the savings rate remains elevated, which should support consumer spending as well as provide cushion against adverse shocks such as tariffs. 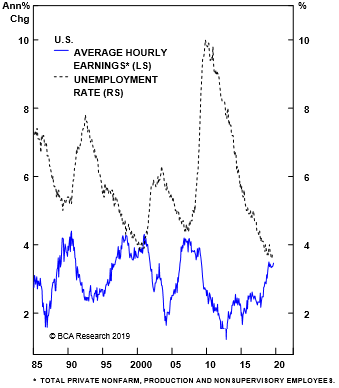 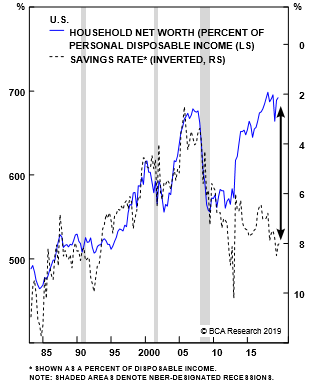 Furthermore, the housing industry is gaining positive momentum, as evidenced by improving building permits, housing starts, and homes sales data.  As we have discussed in previous communications, we initiated a tactical position in U.S. home construction stocks in client portfolios in February based on a view that the industry was poised to recover.  We continue to hold this exposure as the combination of low mortgage rates, a favorable supply-demand balance, and reasonable housing affordability should continue to offer a boost to homebuilders.

Turning to international markets, the strength of the Chinese economy has important implications for global growth.  Although muted in comparison to their efforts in both 2008-09 and 2015-16, Chinese authorities have implemented more than 100 acts of stimulus since the second half of last year to stabilize the economy.  Given the lag between stimulus and the impact on the economy, these measures are just beginning to result in improving data.  For example, manufacturing purchasing manager indices came in higher than expected last month.  Additionally, auto sales appear to have bottomed after declining by approximately 14% earlier this year.  Shown below, a rebound in Chinese auto sales should provide a tailwind to European manufacturing activity. 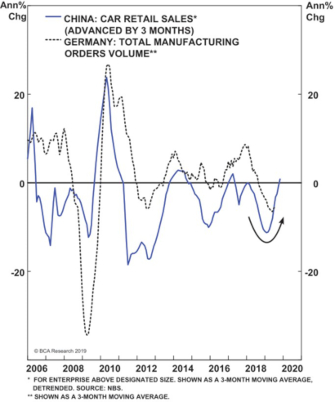 Europe has taken the brunt of slowing global growth as it is more reliant than other major economies such as the U.S. on manufacturing and trade.  Additionally, Brexit uncertainty has been weighing on business investment in the United Kingdom.  A pickup in Chinese activity and global growth should benefit Europe, particularly Germany which appears to be on the cusp of entering a recession.  In the meantime, the European Central Bank has stepped in to support the economy by injecting liquidity.  Shown below, Euro area money growth, which leads real GDP growth, recently turned upward.  Furthermore, bank lending to the private sector has been increasing. 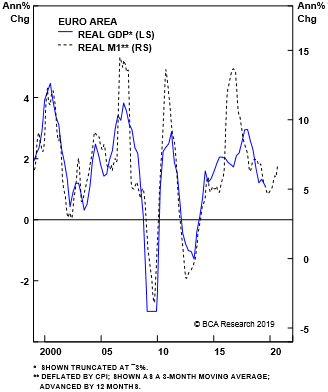 Taking these pieces together, we arrive at a view that the global economy is more likely to continue to expand, albeit modestly, in the near-term than enter a recession.  Monetary policy has become increasingly accommodative with 46 central banks cutting short-term interest rates this year.  As central banks typically are raising rates entering a recession and cutting them in the midst of one, the current backdrop is inconsistent with the historical “playbook” for a meaningful economic downturn.  The primary risk of injecting stimulus outside of a recession is the possibility of sparking unwanted inflation.  While inflation is a lagging indicator, inflation expectations remain below target in most major economies.  Consequently, we expect monetary policy to remain accommodative around the world.

With respect to fiscal policy, we expect existing stimulus to remain in effect in the U.S. but do not anticipate any new initiatives in the near-term.  While Congress is known for accomplishing less in Presidential election years, the impeachment inquiry further reduces the likelihood of substantive law being passed.  Overseas, China plans to step up stimulus, including increasing bond issuance to finance infrastructure projects as well as cutting interest rates and reserve requirements.  Additionally, other economies such as France and India have announced new policy that should be supportive of global growth.

So what does all of this mean for financial markets and portfolio positioning?  If global growth stabilizes and ultimately reaccelerates, both stock prices and bond yields should move higher.  Of course, an adverse shock could disrupt our base case and as we noted at the beginning of this writing, there are numerous potential headwinds at the moment.  In regard to trade, while the U.S. and China have resumed high-level negotiations, the timing and details of a deal are still unclear.  The increasing influence of China around the world suggests that tensions will last beyond near-term trade negotiations.  With respect to Brexit, although Prime Minister Johnson has committed to taking the United Kingdom out of the European Union with or without an agreement at the end of October, the Supreme Court has already blocked his attempt to close Parliament and recent polls suggest that the public is less amenable to leaving.  Concerning the major attack on oil production facilities in Saudi Arabia, while the market may not be appropriately discounting the possibility of another incident, ample reserves should help re-calibrate the supply-demand picture and stabilize prices.  As it relates to the impeachment inquiry, while there have been only two other cases in the modern era, history suggests that the procedures should have an immaterial impact on the trajectory of asset class returns.  In our view, the Presidential election arguably is the greatest source of potential volatility for financial markets given that the three frontrunners have widely different agendas with potential ramifications for specific industries such as technology and health care. 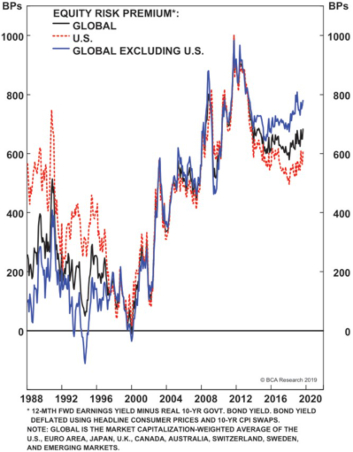 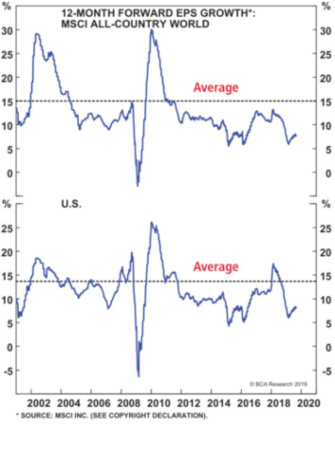 Within equities, we continue to favor the U.S. over international markets given stronger underlying economic data domestically but would consider increasing exposure to international equities with evidence of a durable pickup in global growth.  From a sector allocation perspective, we recently reduced exposure to pharma stocks given the potential for a challenging combination of headline risk and ultimately fundamental risk.  President Trump has said on numerous occasions that he wants to lower drug prices.  While we do not anticipate that Democrats will want to give Trump a win, they have made similar campaign promises.  With respect to security selection, our bias is toward high-quality businesses with reasonable valuations.  For example, within the Heritage Concentrated Leaders Portfolio, our internally managed sleeve of U.S. large cap stocks, we recently added Progressive, a leading underwriter of private and commercial auto insurance and specialty lines in the U.S.  Over the past decade, the company has grown its revenues at a high-single-digit annual rate while delivering solid underwriting profit margins.  Progressive continues to position itself for growth above the industry average.  We believe that purchasing Progressive stock represents an opportunity to invest in a franchise business that historically has exhibited low correlation with underlying economic conditions.

Within fixed income, we continue to favor short-duration securities as investors do not appear to be adequately compensated for taking maturity risk.  We continue to utilize preferred securities to drive incremental income but overall are biased toward quality in fixed income allocations.

Looking ahead, we seek to balance the opportunities presented in a volatile market with the risks associated with the latter stages of a business cycle.  If you have questions about this information or your investment portfolio, please contact a member of the Investment Research Team or your Relationship Manager.