On the heels of the strong rebound in equity markets in the first quarter, second quarter investment performance was broadly positive.  While the combination of volatile trade negotiations and weaker economic data seems incongruous with markets reaching new highs, returns over the last year have been modest and reflective of a slower growth environment.  In the second quarter, U.S. equity markets led the way, with the S&P 500 gaining 4.3% compared to the MSCI EAFE and Emerging Market indices which returned 3.7% and 0.7%, respectively.  Fixed income markets also generated strong returns, with the Barclays U.S. Aggregate Bond index gaining 3.1%.

While difficult to digest initially, the sharp swing in investment performance over the past nine months is a good reminder that financial markets tend to be forward-looking.  Three quarters ago, global equities were correcting due to concerns that the Federal Reserve would continue raising interest rates despite slowing growth, potentially causing a recession.  Although the Fed pivoted in December, pausing on its rate hike cycle, tighter financial conditions in the final months of the 2018 have resulted in weaker economic data this year.  Global equities rebounded in the first quarter of 2019 and moved higher in the second quarter as the Fed left interest rates unchanged and indicated a bias toward lower rates if economic data continued to weaken.  With several major stock indices climbing to new highs and interest rates falling to levels last seen in 2016, financial conditions have eased considerably this year (see below).  Interestingly, three “easing cycles” have already occurred in the current economic expansion: The 2011 U.S. government debt downgrade and Eurozone recession, 2013 U.S. government sequestration, and 2015 U.S. industrial recession and China slowdown.  In each instance, lower bond yields spurred a reacceleration of growth. 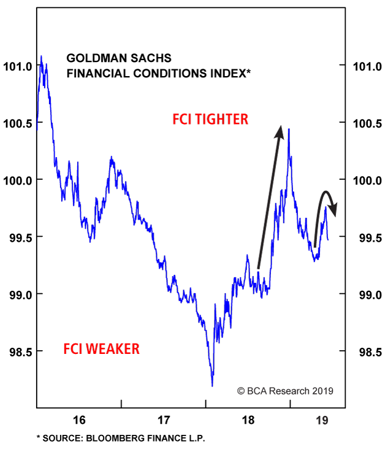 While the business cycle appears to be in its latter stages, our research suggests that a reacceleration of growth due to easing financial conditions is more likely than a recession over the next 12 months.  Below, we share the underpinnings of our outlook and how we are positioning client portfolios.

While U.S. economic growth has slowed, underlying economic data suggests that the current expansion has legs.  Presently, the Fed is projecting real U.S. GDP growth of 1.5% in the second quarter, below the 3.1% reported in the first quarter and the 2.0% average pace during this economic recovery but positive nonetheless.  Any discussion of the U.S. economy should begin with the consumer which continues to exhibit solid fundamentals.  Although consumer sentiment has declined, it remains at a level that is consistent with an acceleration of household spending.  Additionally, the labor market remains firm as evidenced by increasing hourly wages, initial unemployment claims hovering near record lows, and quits and job opening rates near record highs.  Shown below, the unemployment rate has dropped to a level last seen in 1969. 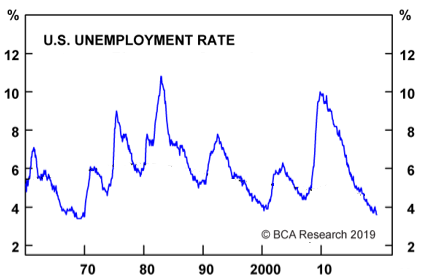 Furthermore, the housing industry appears poised to demonstrate improving fundamentals.  Shown below, history suggests that the recent decline in mortgage rates should spur a rebound in home sales and construction.  Given a favorable outlook for the industry, we initiated a tactical position in U.S. home construction stocks in February. 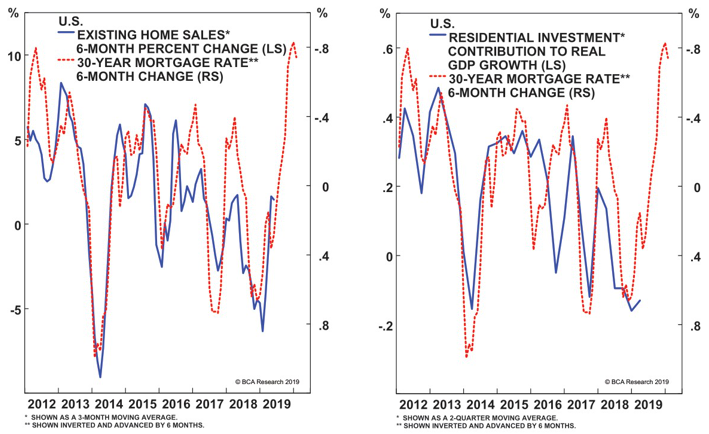 With respect to the U.S. economy, Manufacturing and Services Purchasing Manager Indices (PMI) have fallen but remain at levels that are consistent with expanding activity.  Shown below, capital spending intentions remain resilient as evidenced by an increasing share of small businesses citing that “now is a good time to expand.” 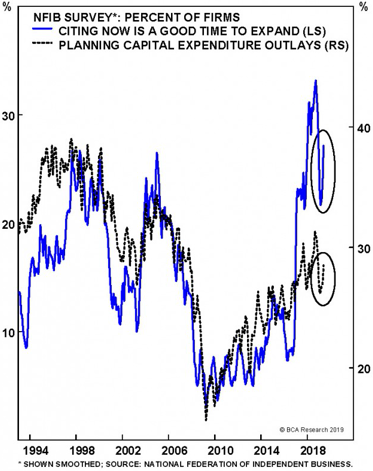 Corporate debt appears to be the weakest link in the financial system.  However, there are several potential mitigating factors, including interest coverage hovering above its long-term average and debt-to-assets modestly below its long-term average (see below).  Historically, recessions have occurred due to some significant imbalance in the system.  Given the current backdrop, we find it difficult to identify any pockets of meaningful excess.

On the monetary and fiscal front, accommodative policy should provide a tailwind to growth.  Recent statements from the Fed suggest that it stands ready to lower rates to prolong the economic expansion.  Fixed income markets have responded by pricing in a 25 basis point cut at the end of July.  If the Fed elects to hold rates steady for longer, a reset of expectations could negatively impact investment returns.  With respect to fiscal policy, while a lower corporate tax rate, looser regulatory environment, and increased federal spending should support growth over the short term, rising deficits and national debt create potential challenges over the long term.

Overseas, monetary and fiscal policy has become increasingly accommodative to address slowing global growth.  In Europe, easing financial conditions should spur credit origination and business activity.  Turning to Asia, the health of the Chinese economy has important implications for global growth.  While China and the U.S. have reached a trade truce, the ultimate terms of a deal have yet to be determined.  Additionally, the Chinese economy is more dependent on capital spending, household spending, and exports to the rest of world than exports to the U.S. (see below).  The Chinese economy began to weaken in 2017 (before trade tensions escalated) due to tighter monetary policy and stricter regulation.  Last year, Chinese authorities reversed course and have now enacted more than 80 stimulus measures to stabilize the economy.  As a result, credit and fiscal impulse has reached an inflection point and should provide a tailwind to Chinese imports and consequently global growth (see below). 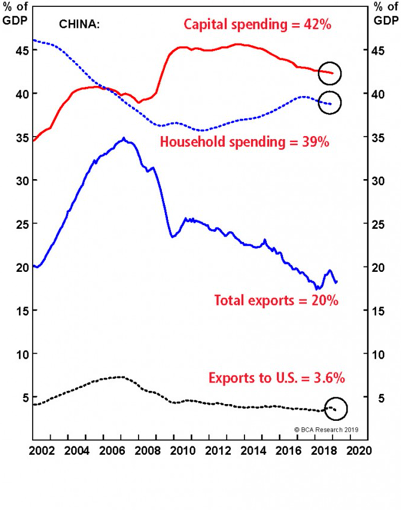 Turning to valuations and corporate fundamentals, multiple expansion has been the primary driver of the rebound in global equities in the first half of 2019 (see below).  While the MSCI All Country World index trades at 15.0x forward earnings, in line with its long-term average, a closer look at individual companies and their attributes tells a different story.  On one hand, over 80% of IPOs coming to market are without earnings, the highest rate since 2000, and the number of companies with extended valuations is rising.  On the other hand, there still appears to be a multitude of reasonably priced businesses.   With respect to earnings, 2019 growth estimates have been revised down to low single digits, suggesting that expectations may be conservative.  Looking ahead, 2020 growth estimates have been unchanged in the low double digits.  While we are skeptical of growth expectations for next year, investors appear to share our view, suggesting that market expectations are more conservative.  Sentiment surveys for retail and institutional investors remain negative and fund flows out of equities into bonds have reached extreme levels, not the traditional set up for a correction. 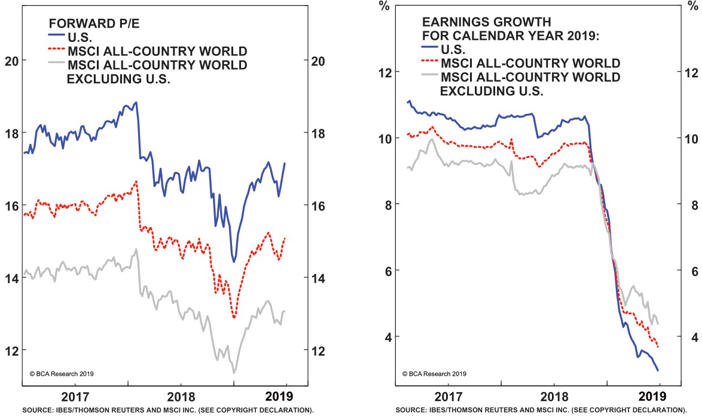 What does all this mean for portfolio positioning?  At the end of last year, we increased equity allocations in client portfolios above long-term strategic targets based on a view that financial markets were pricing in a deeper economic slowdown than the underlying data was suggesting.  While our outlook for global growth is constructive, multiples have expanded to levels that we associate with fair value.  Consequently, we have taken steps to reduce equity exposure in line with long-term targets.

Within equities, we continue to favor the U.S. over international markets given stronger underlying economic data domestically but would consider increasing exposure to international equities with evidence of a durable pickup in global growth.  We remain biased toward high-quality businesses with reasonable valuations.  Within fixed income, although the yield curve has steepened recently, we continue to favor short-duration securities as investors do not appear to be adequately compensated for taking maturity risk.  We continue to utilize preferred securities to drive incremental income but overall remain biased toward quality in fixed income allocations.

Looking ahead, we seek to balance the opportunities presented in a volatile market with the risks associated with the latter stages of a business cycle.  If you have questions about this information or your investment portfolio, please contact a member of the Investment Research Team or your Advisor.

— Back to News & Insights