“It is perfectly reasonable to assume a long-run correlation between the stock market and the performance of the economy. In practice, there is a loose relationship with occasional large deviations.”
Martin Barnes, Bank Credit Analyst

Another quarter has passed in what can only be described as the most extraordinary year in my now thirty-year investment career.  While I will leave the ultimate narrative with historians far more qualified than me, it is difficult to write an interpretation of the current market environment without acknowledging the building level of angst present in our society.  While this is easily the most challenging commentary that I have written, it seems disingenuous to gloss over the challenges we face and simply report on the markets.  In fact, I find our challenges to be materially relevant to any outlook with respect to the economy and ultimately financial markets.  So here goes -  “unprecedented”, “uncertain” – pick your descriptor for the crisis environment in which we live.  As investors, we are charged with taking a dispassionate view to assess markets assuming a normal environment or to anticipate a relatively quick return to normal.  The facts, however, seemingly couldn’t be further from “normal” today.  To list a few:

We face these extreme challenges both economically and societally while our trust in individuals and institutions alike has seemingly reached a nadir.  These challenges will affect society, the economy and markets in ways that cannot be known.  While I am ultimately an optimist when it comes to the future of our country, I fear the current transitory period will result in volatility and uncertainty creating a potentially more challenging set up for the economy and financial markets.

Turning to the Markets

And yet, the stock market continues to move inexorably higher…

There is an adage that the stock market climbs a “wall of worry”, possibly an explanation for the initial rebound from the March pandemic lows.  However, I would posit the climb back to and beyond all time highs feels more like the market riding a wave of liquidity (thank you Chairman Powell) periodically interrupted by presidential tweets.  The risk to a liquidity driven rally, to paraphrase Jim Grant, is that to sustain momentum, the extraordinary policies of yesterday must be even more extraordinary tomorrow.  Markets seem increasingly convicted in this scenario of ramping policy support with speculative activity naturally following.  How else to explain current dynamics in the market: more stocks have risen at least 400% this year for the first time since 2000, Special Purpose Acquisition Companies (SPACs or “blank check companies”) have raised $43B, Tesla’s market cap is four times larger than the big three automakers combined, Apple’s market cap is three times larger than the entire energy sector, options trading exceeding the volume of individual stock trading.   The list goes on…

Yet, there remains a clear disconnect between the economy and asset prices (visions of Wile E. Coyote suspended in mid-air come to mind).  Markets are hitting all-time highs, home ownership rates are approaching pre-2008 highs while unemployment remains elevated and real-time economic data appears to have stalled.  While many analysts will submit that the market is not the economy, this seems quite shortsighted.  I will submit to Martin Barnes view that while the market may diverge at points in time over the course of a cycle, ultimately markets must return to underlying fundamentals.

Long term investors now face an environment where equities approach all-time highs and valuations are stretched on any metric not related to interest rates, which have been driven to all-time lows by Federal Reserve policy.  As aptly described in an attached note from my colleague, Cary Baronian, the role of fixed income in balanced accounts is increasingly challenged as the primary attributes of fixed income (income and diversification) are diminished at the current level of rates.  As such, the traditional balanced approach to portfolio management should be rethought in the context of each investors long term goals, liquidity needs and ability to accept volatility.  Solutions to counteract the lack of income available through traditional fixed income must be assessed with a continued emphasis on risk management – simply attempting to maximize income has its own set of challenges.  Over the course of the last quarter, we have taken multiple steps to enhance portfolio positioning to reflect this challenge including:

In closing, to quote Martin Barnes one more time, “It currently is very difficult for institutional investors to favor fixed-income instruments over a higher-yielding equity market. However, there is no free lunch here. We cannot ignore the argument that low interest rates reflect a very bleak long-run outlook for economic growth and thus for earnings and stock prices.”  We began this note speaking to the deep-seated challenges and near-term risks facing the country and the economy.  The combination of this environment and heightened asset prices argues strongly for a continued emphasis on risk management in client portfolios.  Attempting to maximize returns in this environment seems misguided when looking at prospective returns versus underlying risk.  We remain committed to emphasizing quality businesses through diligent research and are positioned to take advantage of long-term opportunities that patience will reward.  We look forward to continuing to work with each of you to ensure the appropriate balance for your portfolio.

Fixed income historically has played an important role in investment portfolios, generating income and providing stability during periods of economic weakness when capital growth assets such as equities tend to be volatile.  Over the last several decades, however, the ability of these instruments to perform the first function has deteriorated as muted economic growth supported by numerous rounds of quantitative easing from the Federal Reserve has resulted in a slow but steady decline in interest rates.  While investors have been wrestling with the falling amount of income from bonds for years, they still have been able to rely on these securities to accomplish the second task.  Most recently, the 10-year Treasury Note did its job in February and March, posting a positive return as stocks fell sharply in response to the Covid-19 crisis.  Although investors benefited from fixed income once again serving as a hedge in a risk-off environment, they now face a more serious challenge.  With interest rates hovering close to zero, fixed income no longer appears able to generate an acceptable amount of income while the ability to serve as an effective counterbalance to risky assets appears compromised.

Investors have been confronted with the issue of declining income from bonds for decades.  As displayed in the chart below, the yield on the 10-year Treasury Note has been on a downward trajectory for 30 years, breaching 3% in 2009 which coincided with quantitative easing from the Fed during the Great Financial Crisis.  Following the most recent move lower when the Fed responded to the pandemic with policy support on an unprecedented scale, the yield is just modestly above zero. 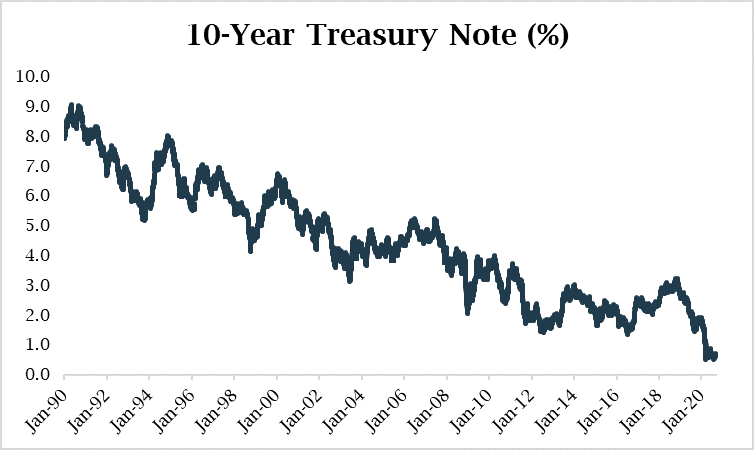 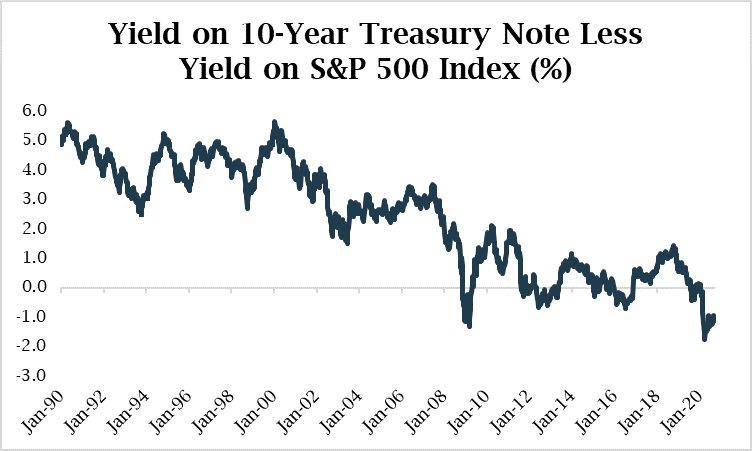 While the amount of income from bonds has diminished, investors still have been able to count on these instruments to provide stability during periods of high volatility for capital growth assets.  As displayed in the table below, the 10-year Treasury Note posted a positive return in each of the last three bear markets in which the S&P 500 Index fell by 20% or more.  In each downturn, the Fed had room to cut interest rates thereby producing capital gains in fixed income (bond prices rise as yields fall and vice versa).  Today, the ability of fixed income to serve as a hedge is much more limited with interest rates residing close to zero.

The performance of fixed income during the Covid-19 crisis in nations where short rates were zero or negative at the start of the pandemic should be a good predictor of how U.S. bonds will fare in the next market drawdown.  As shown below, the 10-year government bond appreciated in G-10 nations where the short rate was positive and lost value in those where the short rate was zero or negative, suggesting that U.S. bonds may be positively correlated with stocks at current interest rate levels. 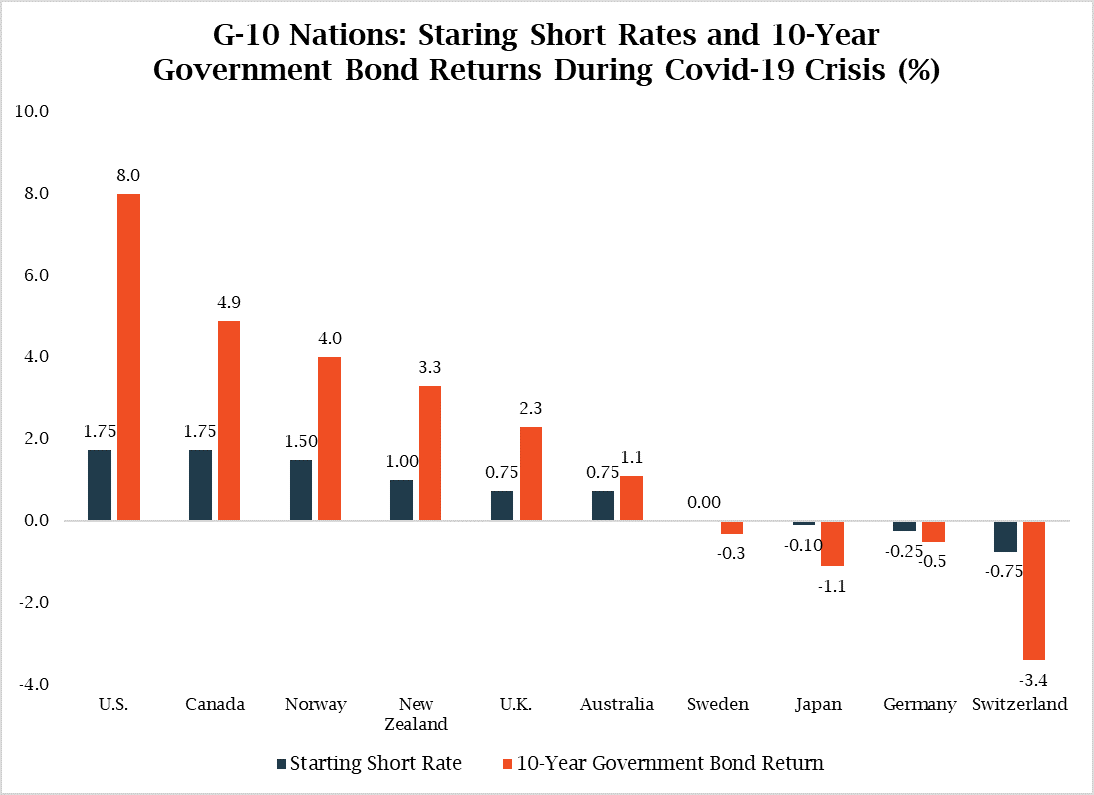 While fixed income continues to possess other attributes that are important to investors (for example, bonds remain some of the most liquid securities available and those with long-dated maturities can help investors reduce risk by allowing them to match assets with liabilities), the ability of these instruments  to perform their two most critical functions clearly has been impaired.  For a balanced portfolio consisting of stocks and bonds, the implication is a lower level of return with a higher level of risk.

Looking forward, fixed income markets reflect expectations that ultra-low interest rate levels are here to stay.  The following chart shows the implied rate on a 20-year interest rate swap starting in 10 years, a forecast of rates long into the future.  Shown below, it is close to zero.

If expectations play out and interest rates remain low, fixed income would outperform cash, but if rates increase, this would present a different problem for investors.  As shown in the chart below, only modestly higher rates would erase that outperformance as the yield associated with fixed income would be offset by capital losses.  Although higher rates would be beneficial to bond investors in the long run, they would adversely impact existing holdings.

While fixed income continues to serve an important role in portfolios, investors may need to reevaluate overall portfolio allocations to compensate for the diminished benefits of fixed income in balanced portfolios.

The information contained herein has been obtained from sources believed to be reliable, and its accuracy and completeness
is not guaranteed. No representation or warranty, express or implied, is made as to the fairness, accuracy, completeness or
correctness of the information and opinions contained herein. The views and other information provided are subject to
change without notice. This site is issued without regard to the specific investment objectives, financial situation or particular
needs of any specific recipient and is not to be construed as a solicitation or an offer to buy or sell any securities or related
financial instruments. Past performance is not necessarily a guide to future results.

Historical performance results for investment indices, benchmarks, and/or categories have been provided for general
informational/comparison purposes only, and generally do not reflect the deduction of transaction and/or custodial charges,
the deduction of an investment management fee, nor the impact of taxes, the incurrence of which would have the effect of
decreasing historical performance results. It should not be assumed that your IA Firm account holdings correspond directly to
any comparative indices or categories. Please Also Note: (1) performance results do not reflect the impact of taxes; (2)
comparative benchmarks/indices may be more or less volatile than your IA Firm accounts; and, (3) a description of each
comparative benchmark/index is available upon request.